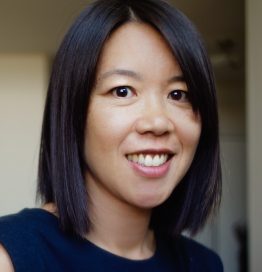 Minh-Ha T. Pham is an Assistant Professor in the Graduate Program in Media Studies at Pratt Institute in Brooklyn, New York. Before arriving to Pratt, she was an Assistant Professor of Visual Studies and Asian American Studies at Cornell University in Ithaca, New York. An interdisciplinary scholar, her research investigates the racial and gendered capitalist economies of participatory media (from social media to other kinds of user-generated media). The intersection of participatory media and capitalism is examined in numerous publications on the topics of fashion blogs, holographic fashion models and avatars, virtual fitting rooms, and most recently, social media and the public consciousness about the legalities of fashion copying. Her first book, Asians Wear Clothes on the Internet: Race, Gender, and the Work of Personal Style Blogging (Duke UP 2015) is an investigation of personal style blogging as a set of Internet-based “taste work” practices that is distinct but not entirely separate from industrial modes of fashion work like apparel manufacturing. In her second book, titled Social Legality: Mediating Race, Morality, and Piracy, it is not media being pirated but the infrastructure that defines, enables, and regulates our very understanding of piracy, creativity, and legality.